This month marks the first year anniversary of Kulinarya Cooking Club. Thanks to Kath, Trish and Trissa, all the way across the globe in Australia, for starting a group that highlights our colorful Filipino cuisine. To mark this special occasion, Anna and Dahlia chose a festive theme to celebrate: Relleno, a term for stuffed food like chicken, fish, crab or vegetables. 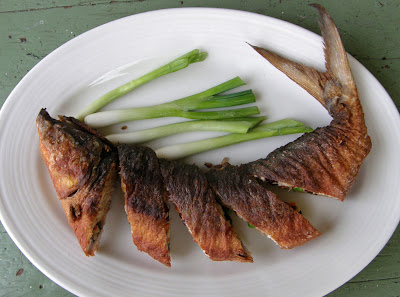 I made Rellenong Bangus (Stuffed Milkfish), one of my favorite dishes growing up. This type of fish is perfect for stuffing due to the thicker skin (just like salmon skin) but the drawback is that milkfish has more bones. Besides the vertebral spine, there are teeny tiny bones along the lateral and ventral sides. This is the reason Rellenong Bangus is a dish considered by many as a "special occasion" dish due to the laborious preparation that goes into the dish. When I say laborious, I only meant one thing: picking out the fish bones! I know this from experience because I was always the one who had to help pick them out. I didn't mind because my Mom would reward me with the best slice: the one with the fish belly, yum! :) 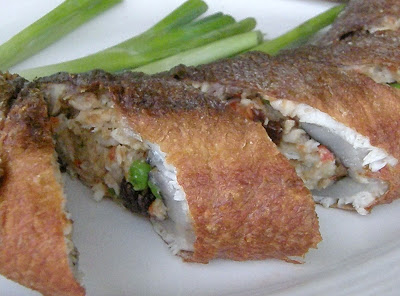 I decided to try something different in preparing my family's Rellenong Bangus recipe by starting with a boneless milkfish; a short-cut to avoid the dreaded bone picking. Most Asian markets now offer boneless milkfish (usually found in the frozen aisle), just make sure to buy ones that has not been marinated. A minor drawback is the fish still have their scales on but given the choice between bones or scales, it is easier to scale the milkfish (just takes minutes) than picking out the bones (may take hours). 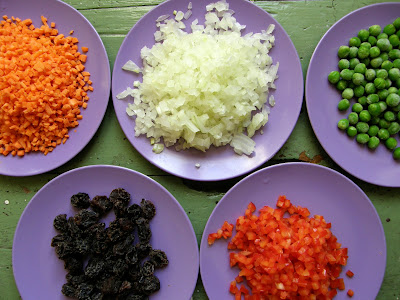 Then it is just a matter of scraping out the meat. Setting aside the fish bodies to marinate in some soy sauce and kalamansi (or lemon). Saute the fish meat with onions, garlic, carrots, red bell pepper, raisins and seasoned with some soy sauce. Remove from heat and let it cool. (The cooling process is usually when you would go over the mixture to pick out the bones which can take hours.) I put the mixture in the freezer for about half an hour to speed the process. Once cool, mix in eggs and bread crumbs to help bind together when you put it back in the fish cavity.
﻿ ﻿
Then it is just a matter of frying or baking the fish until the skin is cooked through. This way of making Rellenong Bangus has been so easy that I won't need a special occasion to make my favorite dish. :)

Prepare fish. Scale and rinse, pat dry. With a spoon, scrape meat off the skin, leaving belly intact. Put fish meat in a bowl, season with salt and set aside.

Place fish bodies in bowl along with soy sauce and kalamansi juice. Place in refrigerator to chill while you cook the fish meat.

Heat oil in pan over medium heat. Add onions and garlic, saute until translucent, do not let it brown. Add carrots and cook for about 2 minutes until soft. Add the fish meat and saute until meat become opaque, about 5 minutes. Season with salt and pepper. Add bell pepper, peas and raisins until heated though (the raisins would have soak some of the liquid the fish gave out). Take from heat, transfer to a bowl and let mixture cool. 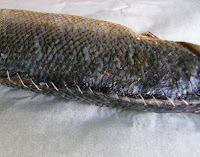 Spoon the fish mixture into the fish and close it back. The seams were sewn together by using a regular needle and cotton thread. Lightly dredge the whole fish in cornstarch before frying it in a wok-ful of hot oil (350F). Fry until the skin is golden brown and crisp, about 5 minutes on each side.

Alternatively, you may bake the rellenong bangus in a 350F degree oven. Wrap the fish with a greased tinfoil, for about 40-45 minutes. Unwrap and broil to get some color in the skin. Though you won't get the crunchy skin when fried.

Please visit my fellow Kulinarya members for their Relleno creations:

You are absolutely right - making relleno is a labour of love... I thought I had it hard picking out the meat from the crabs but bangus is definitely harder - lucky you were able to get the boneless type. Beautiful presentation!

I love your shortcut - what a brilliant idea! For now, I've special-ordered some rellenong bangus from a local lady but I would love to impress the family by making it myself. Outstanding! 8-)

(I'm hoping to read the other Kulinarya Club entries but my Internet connection is acting up - for instance, I can't bring up Trissa's site! 8-( I hope this is not a permanent problem. Thank goodness I can still access your blog!)

I am craving your Rellenong Bangus, Caroline! That close up of the belly did it for me.

I love milkfish--any way it's prepared--but yes, the bones can be a pain. I've never made any type of relleno before though I love to eat it. Will have to borrow your technique should I decide to surprise my family one day and make this. Looks so yummy!

Caroline,
Just to let you know that I think my url was left out of the comment I just submitted. Oops! It's me. :-)

WOW! I didn't know you ladies have been doing this for a year now! Congratulations!! And congrats to your rellenong bangus. It is such a labor love -- picking out the bones, stuffing the fish, deep frying it -- but it's all worth it! Thank you for the post, Carol!

Your rellenong bangus looks delicious and the pictures of the ingredients for the filling is gorgeous, love the violet plates on the green table. This is one of my favorite bangus dishes, excellent job!

Will definitely look for the boneless bangus in one of the Filo shops here=) Thanks for a super excellent tip...and yes..that fat belly looks so beautiful=)

thanks for the tip, Caroline! Now I too can make rellenong bangus anytime..

I love your painted table :)

Oh yeah... we've never attempted rellenong bangus. But, I sure like this "shortcut" method. =)

I envy you for the effort made here. I want to post and eat rellenong bangus too,but didn't want to work so hard. Well done!

The shortcut is an awesome idea!

I'm inspired to try making this again. It looks delicious and perfectly browned.

Wow, I haven't had this in AGES, and I mean decades. You are very talented!

This was my fav growing up too. My grandmother used to make it for me coz she knew I loved it. I love your idea of gettig bangus that is already boneless.

For years I've been thinking of ways to making relyenong bangus easier, and you have the answer!!!! THANK YOUUUUU Caroline you're a heaven sent!!

i can't believe i haven't commented on this yet! all week i was thinking of bangus marinated and couldn't figure out its name so i thought of your post. sheesh i think that was the world telling me that i haven't left a footprint for your nov KCC post.

well here i am thinking about fish and you alembongs. not inclusively, of course, lol!