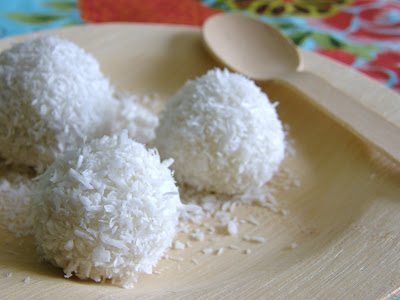 It's a Cooking Challenge concocted up right on Twitter by @jmfield, @DailySpud and @TangledNoodle to come up with a dish, sweet or savory, that consists of potato (Tayto), Rice (Ri) and Coconut (Co). I was definitely up for the challenge.

Right away I wanted to make Ginataang Bilo-Bilo (sometimes called Ginataang Halo-Halo) since all three are well represented in this dish: cubed ube (purple yam), or kamote (sweet potato) for Tayto part; bilo-bilo (balls made out of glutinous rice, same as mochi) for Ri part; and sweetened gata (coconut milk) for Co part.

I got called in to work this week so cooking for this challenge got sidetracked. The night before the challenge is due, I gathered all my ingredients and realized my husband had used the last of the canned coconut milk! The only other coconut in my pantry is dessicated coconut. So now this has become a real challenge, indeed. 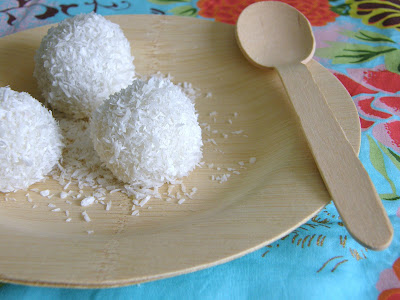 Since I was pressed for time (this was all done yesterday morning, the day we post on the challenge), I ended up just roasting the ube. I mashed it up and used it to fill the bilo-bilo which are now the size of doughnut holes (double their usual size). They were cooked in simmering water. Once they floated up (a sign they are done), the balls were ladled out and rolled in dessicated coconut.

All this was done early in the morning for about an hour. While talking pictures, the boss called asking me to come in earlier. I left for work and didn't get back home until midnight last night. So my post is a day late but overall it was plenty of fun.

They came out better than I expected. The chewy rice balls gave way to a soft, creamy ube surprise. The dessicated coconut gave it a crunchy texture and the flavor went great with ube as they always do.  Next time though I would make it using sweetened coconut since it was not at all sweet, all the sweetness came from the roasted ube. The kids and I ended up dipping this in sugar in between bites.  Ube Halaya (a jam of sorts using purple yam) would also make a great filling. And probably the best would be to use freshly grated coconut mixed in with sugar and sesame seeds (just like palitaw). 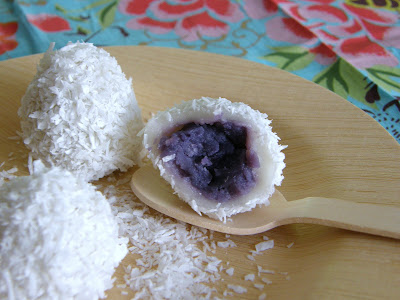 1. Roast ube in preheated 425F degree oven for 30-35 minutes or until soft to touch. Let cool, scoop out of the skin and mash with fork.

2. In a medium saucepan, fill halfway with water and put to boil over high heat.

3. Meanwhile In a medium bowl, place rice flour. Stir in water and mix thoroughly. Add water a tablespoon at a time until dough comes together. Dough should be firm but pliable.

4. Pull one teaspoonful of dough, flatten into 3-inch circle and place about half a teaspoon of ube in center. Gather the edges onto itself to seal. Rub between the palms of your hands to make a ball.

5. Once water boil, lower heat to simmer and drop in rice balls a few at a time. Once it floats, ladle out and roll in coconut. Serve warm or room temperature with sugar for dipping.
Posted by Caroline at 5:47 PM

That looks so good. I'm looking in my fridge for ube right now.

Wow! Looks absolutely delicious! We love ube...can't wait to try this. Thanks for sharing this unique delicacy.

Great idea! We call this klepon.

Confession: The bilo-bilos were always my favorite part of ginataang! It drove my family crazy because I would always scoop them out for myself. So these ube mochi coco balls are exactly what I like. Way to adapt when something unexpected is thrown your way! Thanks so much for participating in #TaytoRiCo! 8-)

Bilo-bilo, ginataang - these are all new words to me - and I've certainly never eaten any of them! I've got some rice flour, though, so I think I will be making some of these coconut rice balls soon. Love how you rose to the TaytoRiCo challenge, despite the unexpectedly missing ingredients.

woah. must must must try to pull these off. caroline, these look amazing! when i get around to making, i'll check back in.

looks delicious! i love sweet glutinous rice like buche buche and defintiely a fan of anything coconut especially palitaw! what a great dessert!

LOVE, LOVE, LOVE! My daughter would gobble these up, given how much she loves bilo-bilo and all kakanin. I will have to try it, it actually reminds me of Japanese Daifuku, too.

too bad i was not able to post mine. i made 2 kinds of sweets but failed to take good pictures and write about just because i was "sick"
but hey do you remember the lo-mi-chi that i was telling you over the start of the year? it's very similar to this one. and my family loves it. i love it though that you put ube...
til next challenge or maybe i could still post it albeit late. if you read my last post it explains why i wasn't able to make it

Joy: hope you get some ube & let me know how they turn out.

Althea: LOL I'll be sure to tell the husband. Funny how things have a way of working out :)

Pepy: Yes we were talking about this on Twitter. Klepon are usually green from the pandan, filled with palm sugar & rolled in freshly-grated coconut-something I would definitely make soon.

Tracey: a pleasure to join in the fun! Hopefully I will make a proper ginataan bilo-bilo very soon (I still want some even after making these). I need to buy a kudkuran since I definitley miss freshly-squeezed coconut milk. I will make lots of bilo-bilo just for you. :)

Aoife: so glad to make this challenge and even better that I am getting you to try making them. Please let me know how they turn out.

Allyn: excited to know you'll be trying these out. Just holler at Twitter if you have other questions.

Nastassia: Thank you! and love it when you drop by here. Hope to see you real soon, I still owe you a strawberry donut :)

Liren: your daughter is after my own heart! Isn't it so awesome when kids gets so enthusiastic about food? Hope you and your daughter have lots of fun making (& eating) them.
Love that these are so familiar, just like Indonesian klepon and now Japanese daifuku :)

ooooooh!! yay you put in the ube inside the bilo bilo!!

i just want to roll around those balls of coconut goodness and stuff my piggy pot belly silly. (i wish i was joking)

you have to be careful of what you post or i might just plead and beg you to bring me over leftovers in the fall. as long as there's no bite marks, i won't complain :)

Oh wow Caroline! Palitaw with ube inside? This is double the pleasure. I think I'm gonna have two please... Dozen that is! LOL!
Thanks for sharing.

Caroline, these look amazing! I love the pillowy soft coconut-crusted outside and the beautiful purple surprise inside. Ube always sounds great to me. Wow, great job putting the three components together. :-)

hi there! I was so very eager to know what it was like(..maybe taste like butchi?..or something..it is what i thought in mind). So I tried it today ds evening. It was so easy to make,and once floated, i immediately rolled it in d. coconut, then tasted it..taste like palitaw!,hehe. I added my camote filling w/ condensed milk & honey. it still taste good but not sweet. I still appreciate your hard work.. It is a great recipe! GOD BLESS..

Wow, what a creative recipe. I've never cooked with ube or glutinous rice flour. I'm inspired to try something new. I'd love to taste these. :)

These challenges really force you guys to think fast. And hard! This is one that would not immediately come to our minds, so it's awesome to see how you made it work.

hwaw! hwaw! hwaw! awesoooome! i love i love. i will definitely definitely make this. there's this asian ice cream shop here in melbourne that experiments with rice balls but since you gave us directions, ima beat those suckers to a soft, gooey, rice-ball consistency. hehehe.

Caroline, This is incredible. The purple potato, rice and coconut, what a dynamite combination. I LOVE anything coconut!!

Wow! I'm going to attempt this this weekend!

That looks so good and easy to make. I'm sure my food allergy family will like this. Thanks Caroline for sharing.