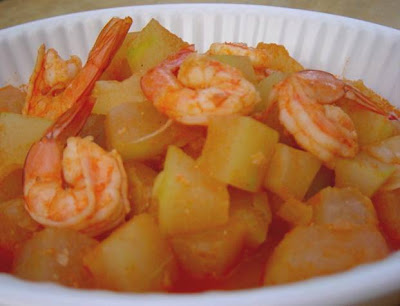 My dad got an upo (Filipino bottle gourd or white squash) that one of his friend grew in their garden. So when I saw him this weekend, he proudly showed me this and casually mentioned he also have some shrimp in the fridge. That's a hint I should start cooking.

I haven't had upo in years and remember eating it all the time in the Philippines. I've eaten it cooked with different meats (ground pork, chopped chicken, or both) and even noodles, like miswa. It's also a very easy dish to prepare.

Since my dad bought some very nice head-on shrimp and can tell there's roe in it, I decided to leave the heads on them. (I also know my dad is a shrimp-head-sucking guy so more yummy goodness for him!) But I also wanted to peel the shells since peeling them at the dinner table slows down my eating process :) so I got my kitchen scissors and started to cut the shrimp shells off. 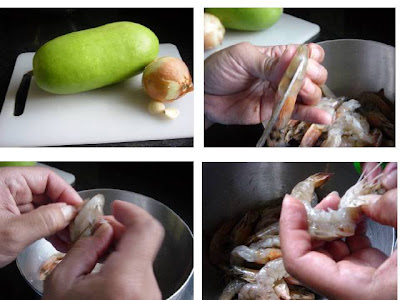 I started from the back of the shrimp's neck and cut along the back side and stopped when I reached the last segment or tail. This way was also good since I got to devein the shrimp at the same time. Cool trick I learned years ago, don't know where I picked it up. Since I had the scissors, I also trimmed the little legs, pointy nose and long thread-like antennaes on them.

Once the shrimp and the rest of ingredients are ready, I heated a couple tablespoons of oil in a wok or large skillet over high heat. Then I add the garlic and sauteed for about 30 seconds and fragrant. Then I added a large chopped onion and cooked them until soft, about 2-3 minutes.

I placed the shrimps next and cooked it with some salt (and/or patis). I tried not to stir too much but some of the heads fell off from the bodies (oh well). As the shrimp started to curl and turn opaque, I spooned it out to a plate and set aside. (I also didn't want to overcook them while I cook the upo.)

So once all the shrimps are out, I then added the upo which I cut into cubes. I sauteed some more until it got soft then added a cup of chicken broth and let it boil. Once the upo is tender, I placed the shrimps back to rewarm and served it with rice. Yum! 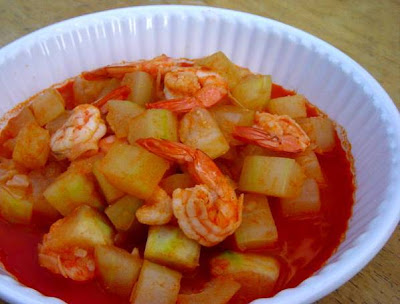 Just look at that bright orange broth, courtesy of the shrimp roe. (Also, notice a detached shrimp head at the bottom-left corner at the picture above.) I kinda wished I added more liquid so I can have more broth to soak into my steamed rice.
Posted by Caroline at 9:33 PM

This is going to be so good... No doubt perfect with rice. Haven't had upo in a long while.

Better cook some up soon, Jude! I haven't had it in awhile either and now been wanting to cook them again.