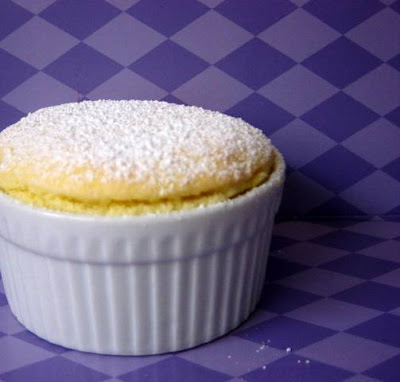 Remember eating Lemonhead candies? I used to eat them with my baby brother (who is 8 years younger) and my litle cousin (who is 4 years younger than my lil' bro) when I picked them up from school. I would babysit them in the afternoon up until my aunt picked my cousin up after work and my parents would come home. I was in highschool and only been in US a couple years. Back then, I had trouble finding sampaloc candies (wrapped in yellow cellophane) and found Lemonheads to be a good substitute.

I made Lemon Curd a couple weeks ago and used it to make these yummy treats found in this book.

Preheat oven to 325F. Prepare ramekins by brushing insides with butter and coating completely with sugar. Bring a pot of water to boil.

In a large bowl put lemon curd and sift in flour. Then stir in milk and set aside.

In a medium bowl, whisk the egg whites until foamy. Add the cream of tartar and continue to whisk until soft peaks. Slowly add the sugar, a tablespoon at a time until stiff peaks appear and becomes glossy.

Fold the egg whites into the lemon curd mixture, one-third at a time until incorporated. Fill ramekins and place in a large baking pan. Fill the baking dish with warm water until it reaches halfway the ramekins. Place in oven and bake 20 minutes or until set and golden brown.

Serve right away inverted onto a plate and served with fresh berries or chocolate sauce. These can be made in advance, covered and kept in the fridge for up to a week and reheated in a 350F oven for 5 minutes. I found they are good cold as well, eaten with a spoon straight out of the ramekin. It's been too hot and didn't want to turn the oven on :)
Posted by Caroline at 9:51 PM