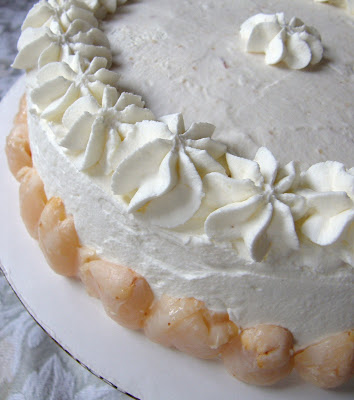 Though I have been absent here for a couple of months, I've been baking up plenty of cakes. Last month, my youngest son turned seven and I baked him his request for a pineapple cake. This month alone, six people I know celebrated their birthdays. They all love to receive a cake since I've started the tradition several years back of baking birthday cakes. This Lychee Mousse Cake was especially baked for my sister-in-law. 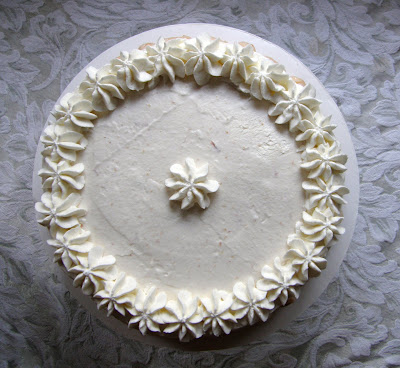 Lately, I've been experimenting with my go-to Chiffon Cake recipe and adapting it to different flavors. I like to pair the chiffon cakes with a similar lighter fillings and found mousse to be perfect. So far these past weeks I've made pineapple (for my son's Pineapple Chiffon Cake), strawberry, chocolate and vanilla (for my niece's Neapolitan Banana Split Chiffon Cake), and peach-mango (for my other niece).

I've even gone and baked a Turon Chiffon Cake. This was just to satisfy a craving for turon when I found myself stuck at home without lumpia wrappers. This one didn't have a mousse filling but turned out a success so hope to bake another one soon to share with you.

But for now I'd like to share you my Lychee Chiffon Cake. The cake were baked in cake pans instead of the traditional angel cake or tube pans. The airy Lychee Mousse was filled in between the two cake layers and more mousse were spread on top. The cake was then finished with a little whipped cream and left for a few hours in the refrigerator to set. I made the cake in the morning and we enjoyed it after my sister-in-law's birthday dinner. 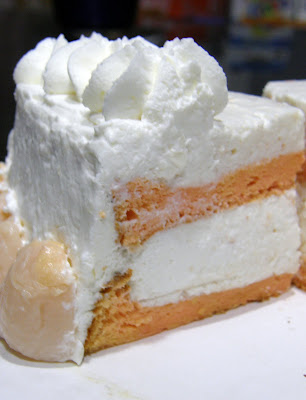 I used canned lychees since they are readily available. Realizing the canned lychees had a tinge of peachy color from the canning process, I added a few drops of red food coloring which gave the yellow cake batter (yellow from the egg yolks) a salmon-peachy colored hue which complemented the lychees a little.

I have already made plans to make this cake again. Next time I will try adding a mirror glaze like the ones I always see on those fancy patisseries.


For Lychee Cake:
Preheat oven to 350 degrees. Use pan spray or butter to grease bottoms of two 9-in pans. Line them with parchment paper. Do not grease the parchment or sides of pans.

In a medium mixing bowl, whisk together flour, sugar, baking powder, and salt; set aside.

In a small bowl, add oil, egg yolks, vanilla, and lychee syrup; mix to combine. Add to flour mixture and whisk until smooth.

In another large bowl, beat egg whites and cream of tartar using an electric mixer until stiff peaks form.

With a rubber spatula, gently fold beaten egg whites into batter just until incorporated. (DO NOT OVER MIX or you will deflate the air bubbles and cake will not be light and airy.) Add food coloring is using.

Divide into 2 prepared pans. Bake until a toothpick inserted into center of cake comes out clean, about 20-22 minutes.

Invert pans on cooling rack and let it cool completely, about 1 1/2 hour.

For Lychee Mousse:
Place lychee and syrup together in a blender or food processor and puree. Pour into a large bowl and set aside.(A)

In a small pot on medium heat, boil water and sugar until it turns into a syrup, about 5 minutes. Do not let it turn color, syrup should still be clear. Meanwhile beat egg whites to soft peak. Then gradually add in sugar syrup in a slow steady stream until stiff peaks form. Be careful with the hot syrup. Set aside.(B)

Whip the cream until soft peaks form, do not overbeat. Set aside.(C)

In a small bowl, soak gelatin in 2 tbsp of water for about 5 minutes to bloom. Then melt the gelatin in the microwave 15-20 seconds. Stir and add into the lychee mixture.(A)

Fold in the egg white (B) and whipped cream (C) into lychee-gelatin mixture (A) until just combined.

Whipped Cream Frosting:
Chill the mixing bowl and whisk you will be using by placing in the freezer, about 10 minutes.

Cake Assembly:
Place one layer of cake on cake board. Spoon about 2/3 of lychee mousse. Spread evenly up to 1/2 edge of cake.

Top with the other cake layer and spoon the remaining mousse.

Decorate the sides of cake with whipping cream frosting.

Place in refrigerator to chill until set, 4-6 hours but overnight preferable. 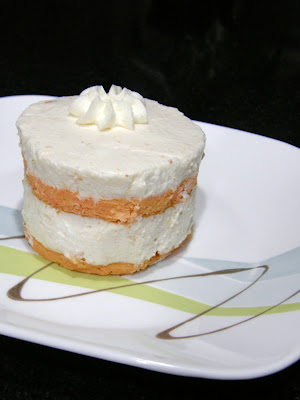 *Sighs* Such a pretty cake, and absolutely delicious, I'm sure! 8-)

I really envy and admire people that can bake (because I can't) :(. This is a beautiful cake Caroline. Good job!

Looks great, Caroline. I love anything with lychee!

Wow! Wow wow wow! That looks fabulous Caroline... any chance I can spike it with vodka and make a lychee martini mousse cake? :-)

Lychee? That looks so good.

Looks very good, Carol! I don't have piping nor decorating skills. I wanted to bake with lychee, but I ate all 2 pounds of what I bought. LOL.

Carol, I just woke up and this is the first thing that I see. I thought I was dreaming... no really because it looks so heavenly...then it's lychee pa. I love lychees. Maybe you should teach me how to bake haha.
I miss seeing you on twitter.
Malou

What a delightful cake! This is great for the summer months! Must make this one for the family ! Thanks for sharing this and all the other good recipes.

LetMeEatCake Eat With Me! said...

what a gorgeous cake! i absolutely love lychees and i'm happy to know that using canned lychees worked out great. I also love that you decorated the cake with lychees too! you are so talented!