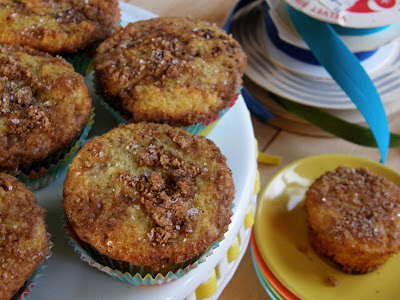 I can't believe it's been so long since I've posted! I was unexpectedly called to work in short notice and as always, it took longer than planned. I ended up working four weeks straight (mostly 16-hour days) with only a total of two days off. This surely got this little old blog of mine neglected.

So when work finally ended Thursday, I was excited to start cooking and baking again in my own kitchen. Annapet of The Daily Palette and Malou of Skip to Malou suggested I bake muffins with them. I've seen how much fun they've been having putting their own spin on a muffin recipe so of course I said YES. 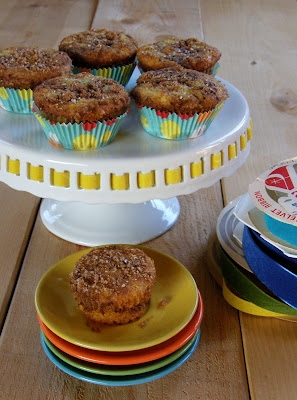 This week we are baking Coffee Cake Muffins from Martha Stewart. These little cakes are moist and really tender due to sour cream and not only topped but also filled with crumbly streusel. A little mishap when I baked them yesterday, not realizing the recipe yields 12 jumbo size or 24 standard size muffins, I only used 1 standard muffin pan that only holds a dozen so you could probably just imagine the mess that ensued putting double the batter in one muffin pan.

So today, I decided to bake them again using the correct proportions and they came out so much better. I ended up using yogurt for the sour cream since I had used it all from the previous batch. This time, I also added a few sprinklings of Sugar, Chocolate & Coffee Beans before placing them in the oven. I bought this new item, a grinder gadget from Trader Joe's. Basically a pepper mill-type grinder filled with sugar crystals, chocolate and coffee beans. It produces coarse grinds of all three that gives you a little something crunchy-sweet with hints of chocolate and coffee. (though they looked like they were sprinkled with salt and pepper!) I have been putting it on every thing lately, from ice cream and yogurt to buttered toast and cereal. So if there's a Trader Joe's near where you live, I recommend you get one and try it for yourself. 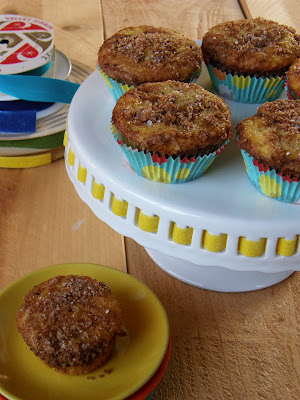 Also want to share you my new cake stand. I know this style have been around awhile but I finally found one (and for a steal, too) so decided to get it as a gift for me for working so hard this past month. The best feature is that I can put different kinds of ribbons through it to match the treats I've baked. Also perfect since I now have another way to use my collection of vintage ribbons. :)

Muffin Monday is an initiative by Baker Street. A culinary journey of sharing a wickedly delicious muffin recipe every week. Drop in a quick line to join her on her journey to make the world smile and beat glum Monday mornings week after week.
Posted by Caroline at 10:20 PM

Hey Carol! How fun to have you in this Muffin Monday. I love your new cake stand. Glad you put them into use right away and excited how you could change it into your vintage ribbons.
and oh about the muffins as yeah this post is about muffins right? lol! They are so pretty and ready for grabs.
I love love love that you are posting again. It's been awhile Carol! Happy Monday!

Oh I am so glad that Annapet and Malou got you to join my muffin madness.


The cake stand and your muffins look gorgeous!!

Hi there, it was nice baking with you this week! Will have to look into that grinder. Sounds like a yummy sprinkle to add! Good looking muffins! :)

So happy baking with you, Carol! I passed out quickly last night. So tired from working in the yard.

You were so sweet to wait for my post to re-post at midnight! Thanks, Carol!

Okay I need to get my hands on one of those grinder gadgets...genius! Bet the flavours of chocolate and coffee paired beautifully with these muffins.

Those muffin tops look delicious! Yes, Caroline it's been a while since you posted your last blog. I keep coming back to check, you know. :)

I love your cake stand, Carol I would love to gift myself with one too :) Yummy muffins, btw!

LetMeEatCake Eat With Me! said...

excited to make these next time i have a moment they look so tasty!

I love your muffins. I love how you sprinkled them first before baking, which would've given you a contrasting texture to the muffin.